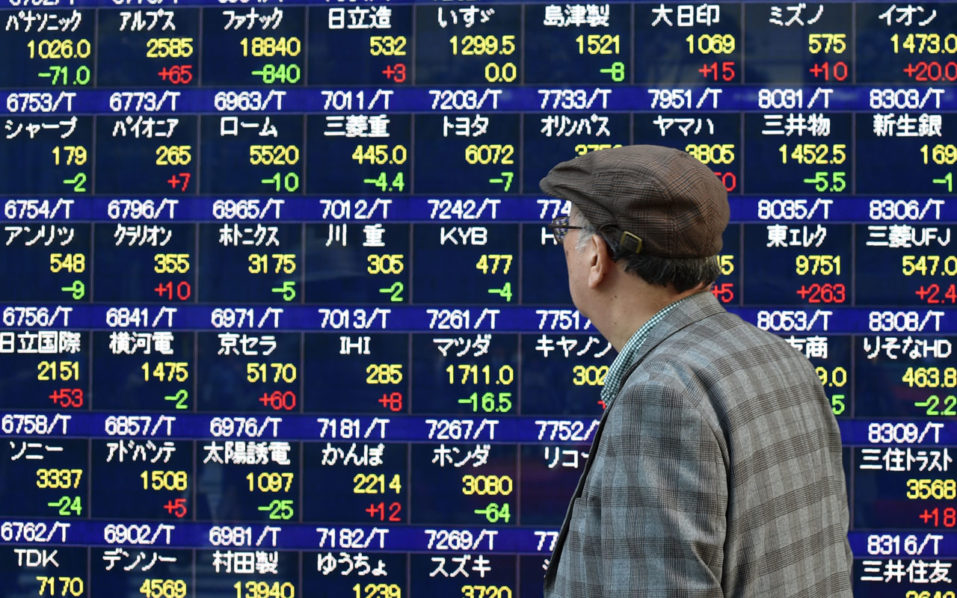 A pedestrian looks at an electronic stocks display in the window of a securities company in Tokyo on November 1, 2016./ AFP PHOTO / KAZUHIRO NOGI

Tokyo stocks fell Tuesday on late profit-taking, with investors keeping to the sidelines as major global markets remained closed for the Christmas holidays.


“As trading has gotten thinner with a lack of fresh trading factors, investors appear (to be) cashing in on their recent gains,” said Hikaru Sato, senior technical analyst at Daiwa Securities.


“It is difficult to see a clear direction in the market as foreign investors are absent from trade with transaction volumes low,” Okasan Online Securities said in a commentary.


Investors are awaiting the release Thursday of minutes from the Bank of Japan’s policy meeting last week, it said.


Mitsubishi UFJ Financial was down 0.45 percent at 836 yen while its rival Sumitomo Mitsui Financial slipped 0.67 percent to 4,884 yen.


“The markets regained some of the ground lost in previous sessions but it is hard to predict if they will maintain steam as the end of year approaches,” said Zhang Yanbing, an analyst with Zheshang Securities.


Financial markets in Hong Kong, Jakarta, Sydney and Wellington were closed for the holidays.
at December 26, 2017