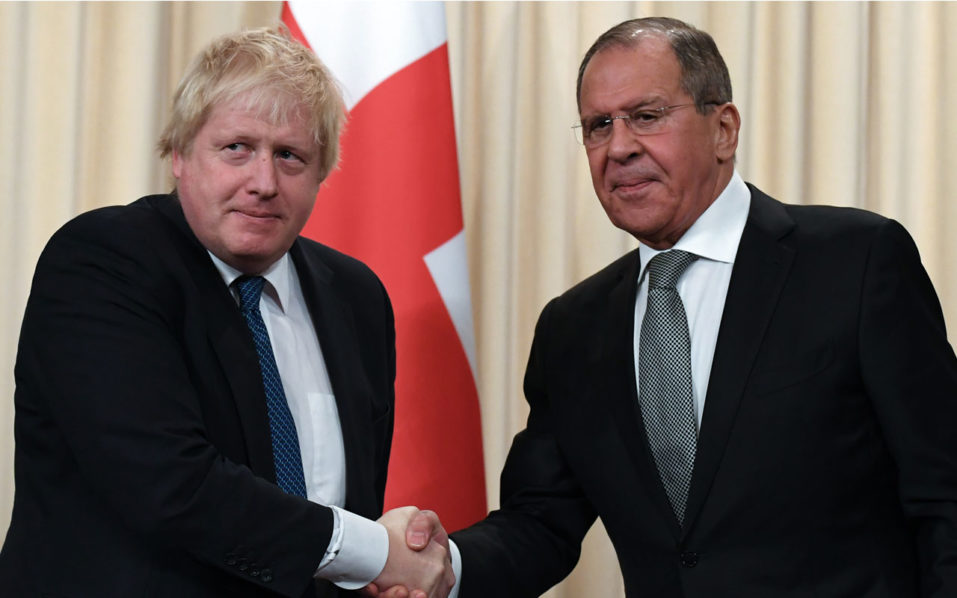 British Foreign Secretary Boris Johnson on Friday sought to open up communication channels with Russia after years of hostility on the first official visit by a foreign minister from London in five years.


Britain’s outspoken foreign minister arrived in Russia after cancelling in April a planned trip at the last minute over Russia’s support for the Syrian regime of President Bashar al-Assad.


Johnson told his Russian counterpart Sergei Lavrov that Russia and Britain should cooperate for the sake of global security and that the countries’ similarities were more important than disagreements.


“We have a duty to work together for peace and security,” he added.


“Where we can I think we can find positive cooperation on issues we have substantial interests in common,” he said, referring to Iran, North Korea and Syria.


“Our ties — there is no secret here — are at a very low point,” Lavrov said.


The Foreign Office said ahead of the talks that Johnson would stress that the two countries’ similarities “far outweigh our current political disagreements.”


“The Kremlin has positioned Russia in direct opposition to the West, but it doesn’t have to be that way,” Johnson will tell Lavrov, the Foreign Office said.


While the Moscow visit could signal an improvement in relations, Johnson himself said he holds out little hope that ties with Moscow could undergo a full-blown transformation.

‘I do not believe in reset’
In an interview with Polish news agency PAP ahead of his Russia visit, Johnson said he was “no cold warrior”, but he did “not believe for a second that relations with Russia can be reset.”


Johnson arrived in Russia from Poland where he accompanied British Prime Minister Theresa May on Thursday.


The Russian foreign ministry’s spokeswoman Maria Zakharova said the diplomatic chiefs planned to “look for ways to normalise and activate the bilateral relationship.”


Relations between London and Moscow soured after Britain sought to prosecute suspects in the killing of Kremlin critic and former spy Alexander Litvinenko, murdered by radiation poisoning in London in 2006.


Britain has also been a fervent supporter of Western sanctions against Russia over its role in the Ukraine conflict and annexation of Crimea in 2014.


The relationship suffered further blows after Russia’s intervention in the Syria conflict on the side of the Damascus regime in September 2015.

‘What’s the Syria plan’?
Johnson, who in his capacity as mayor of London called Russian strongman Vladimir Putin a “ruthless and manipulative tyrant” in 2015, is expected to make Syria a key focus of the talks with Lavrov.


Johnson told the PAP agency that Britain and Russia still “have huge differences on Syria.”


“I would be interested in how the Russians see the future of Syria: Assad is still on the throne but what’s the plan? He’s not a very popular person, so how is it going to function?” Johnson said in remarks translated into Polish.


Concerns are also running high in Europe over the Kremlin’s use of cyber-tactics and misinformation to cause political destabilisation around the continent and to draw former Soviet states back into its embrace.


Following the 2016 referendum on Brexit, in which Johnson campaigned to leave the EU, Britain has joined the growing number of Western countries accusing Russia of interfering in their political systems.


In a major foreign policy speech last month, May accused Russia of attempts to “weaponise information” and “threatening the international world order on which we all depend.”