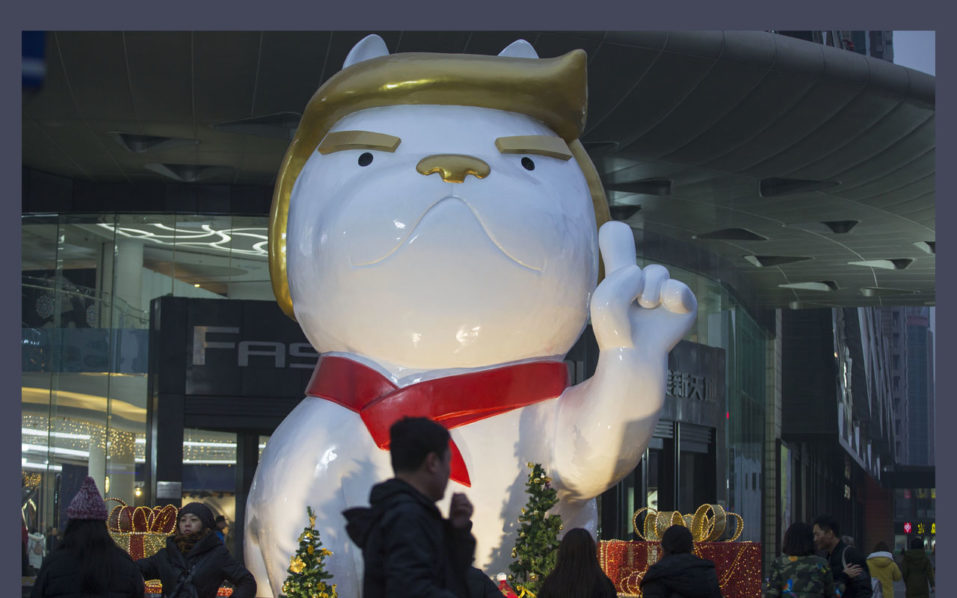 People walk past a statue of a dog, with a resemblance to US President Donald Trump, outside a shopping mall in Taiyuan, in China’s northern Shanxi province on December 29, 2017. A mall in northern China has once again installed a larger than life animal statue with more than a passing resemblance to US President Donald Trump. This time, in anticipation of the coming Year of the Dog, the cocky rooster of last winter has been replaced with a smirking canine. / AFP PHOTO / STR / CHINA OUT

A mall in northern China has installed a larger-than-life canine statue with more than a passing resemblance to US President Donald Trump to welcome the coming Year of the Dog.


The giant pooch towers above shoppers in Taiyuan, capital of Shanxi province, sporting a slick golden pompadour, angled brows and a red scarf with one index finger raised in a distinctly Trumpian manner.


As he was born in 1946, Trump, who has been accused of having more bark than bite, is a dog under the Chinese zodiac — a trait which he shares with his predecessors George W. Bush and Bill Clinton.
Those born in the Year of the Dog, according to Chinese astrology, are forthright and extremely loyal, in addition to having a strong sense of justice. But they can also be stubborn, irritable and easily angered.


Last year the mall erected a large Trump-like rooster, which inspired numerous replicas, including a giant inflatable one placed not far from the White House this summer.
at December 29, 2017