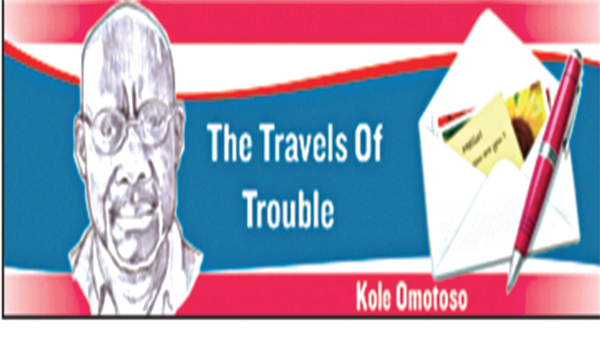 
Why has corruption become so visible?


What are the political, economic, moral and social functions of corruption?


And why do Indian voters prefer politicians with criminal records to those who are clean and without corruption?


And why all these questions?


The reason for all these questions is that every Nigerian is temporarily out of prison! Almost everybody can be found to be in violation of some law or another at any point in time. At least the police at roadblocks only need to look at you and your car before they make up your offence for which you must pay them a bribe.


Why these questions? The reason is that what we give as gift is now seen as bribe and so corrupt. But who gives someone nine point seven million dollars and seventy-four thousand pounds as gifts to one man? And the man goes to hide these wonderful cash gifts in a guest house at the edge of a high density location at the edge of the city? If gift-giving is mutual, what did this man give in return?

Why these questions are because we do not know what is corruption but we declare that what we are doing is not corruption.


Is it corruption when government cannot supply the most basic needs of a people they have sworn to serve, and the people find informal ways to get what they need. Is it corruption? When government outsources its responsibilities to its own private companies and they still do not provide the goods and services, is it corruption on the side of the people? Some of the definitions we need to teach at one hundred level says that using official positions for private profit is corruption. Does that exclude ordinary people, who hold no official or government position, cannot be corrupt?


Almost twenty years after the momentous event of the election of Nelson Mandela as president of The Republic of South Africa, we hear, on the playground of a girls’ secondary school in Johannesburg the following mangling of the first lines of the national anthem (some call it item!):

Is it a Ferrari? Let’s find out.

Voetsek,“I want my ballot back!” (* bad swear word in Afrikaans, the language they protested against in 1976!)


Of course corruption have always existed. It was there but it did excite academic attention. Small acts of pilfering, cornering some advantage that did not hurt others, nothing you cannot chuckle about and go on with your life. But, as if suddenly, corruption became big news. Transparency International appeared, created by former executives of the World Bank and the IMF. Then the government of the USA started passing laws against bribery and corruption among American companies trading overseas. And OECD countries made corruption an exception to playing with any country.
Why was this so?


Let’s go back to Transparency International and the Indian voters’ preference for not just corrupt but criminal politicians. Transparency International was interested in building a broad coalition against general corruption, not deal with concrete cases of corruption. It’s national chapters brought together the names of the heroes of local corruption scandals and these chapters never work with local anticorruption activists.


In a book entitled WHEN CRIME PAYS: Money and Muscle in Indian Politics by Milan Vaishnav the first chapter talks of Lawmakers and Lawbreakers: The Puzzle of Indian Democracy. We know that India is the largest democracy on earth. It’s elections going on for three months over mountain snow and verdant forests, crossing rivers and visiting remote hamlets. The election of 2014 “was the largest democratic exercise ever undertaken.” 554 million voters queuing in 900,000 polling stations to vote for 8,251 candidates representing 464 political parties. The election voted out the Indian National Congress and brought in the Hindu Nationalist party for a good governance. Yet, one third of the members of the new parliament were facing ongoing criminal prosecution deserving of jail or a death sentence if found guilty. The writer concludes, with detailed information, that voters have concluded that if governments cannot provide goods and services, tough criminal guys in parliament can do it. How has democracy come to nestle next to corruption and criminality? So many questions!