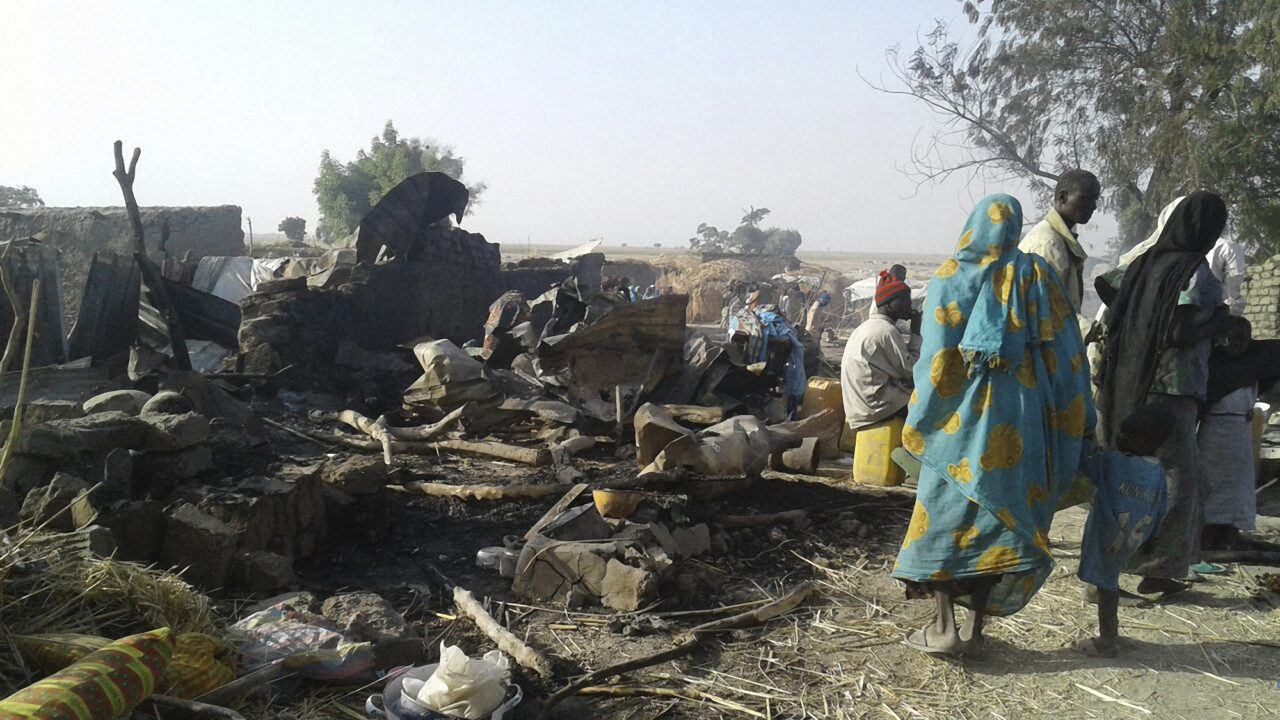 This handout image received courtesy of Doctors Without Border (MSF) on January 17, 2017, shows people standing next to destruction after an air force jet accidentally bombarded a camp for those displaced by Boko Haram Islamists, in Rann, northeast Nigeria. At least 52 aid workers and civilians were killed on January 17, 2017, when an air force jet accidentally bombed a camp in northeast Nigeria instead of Boko Haram militants, medical charity MSF said.

Urge Military To Live Up To Expectation Arewa leaders have expressed shock and fear over the renewed attack by terrorists in the northeastern states, urging the Nigerian military not to relent in its effort to flush out remnants of the insurgents.
The northern leaders, under the umbrella of the Arewa Consultative Forum (ACF), in a statement issued in Kaduna, said: “We learnt with shock, the multiple bomb explosions that occurred on Wednesday morning at Muna Garage in Maiduguri, the Borno State capital, caused by suicide bombers, which killed eight persons and injured many, as confirmed by the state Police Command.


“The atrocities by the insurgents on innocent persons are most barbaric, callous and condemnable.“ACF is very much worried and concerned with the recent spate of bomb explosions in Maiduguri and other parts of the state especially, as it affects Internally Displaced Persons (IDPs) camps.”


The statement signed by the Forum’s National Publicity Secretary, Alhaji Muhammad Ibrahim, noted: “ACF affirms its belief in the capability of the military and other security agencies in the resolve to bring to an end this intractable insurgency in the Northeast region.


Besides, Ibrahim commended President Muhammadu Buhari for his condemnation of the inhuman and unnecessary shedding of human blood and destruction of property in a reckless manner in some part of the country.
at March 25, 2017