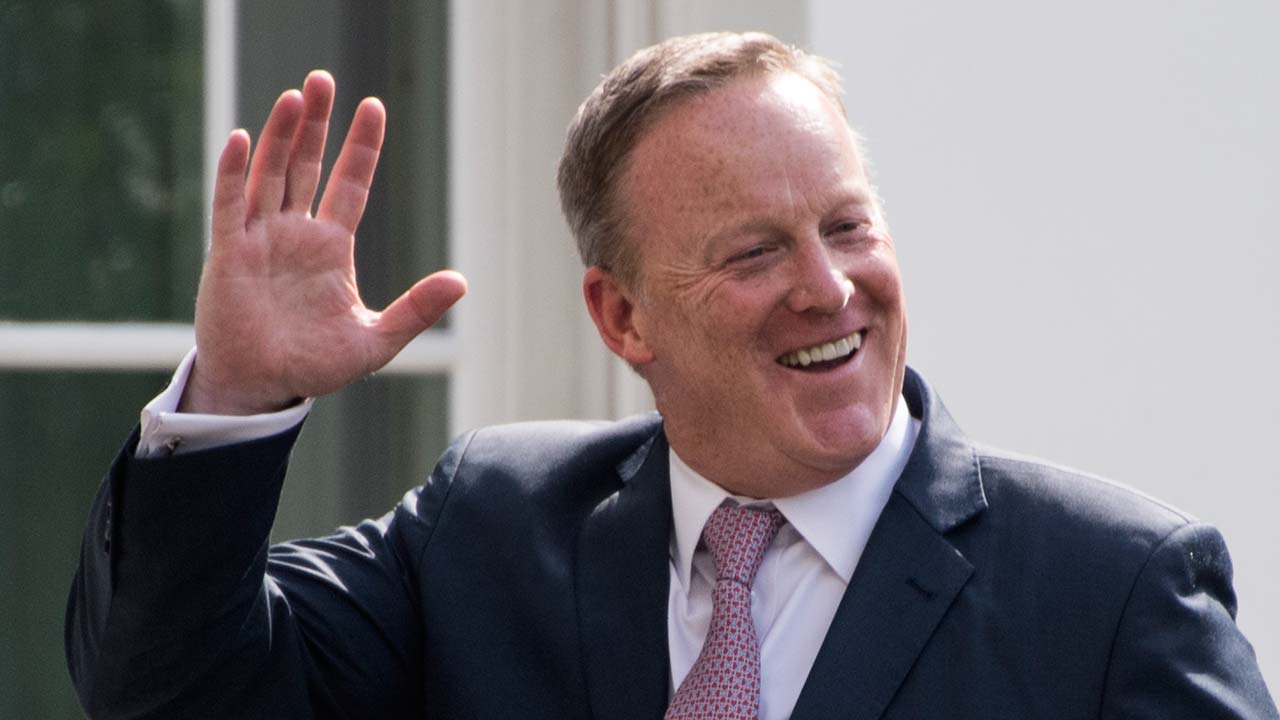 Outgoing White House Press Secretary Sean Spicer smiles as he walks into the West Wing of the White House in Washington, DC, on July 21, 2017. Spicer abruptly resigned on Friday after a tumultuous six months in the spotlight. JIM WATSON / AFP


“It’s been an honor & a privilege to serve @POTUS @realDonaldTrump & this amazing country. I will continue my service through August,” Spicer tweeted.


In a written statement, Trump said he was “grateful” for Spicer’s work and praised his “great television ratings” — a reference to Spicer’s keenly watched, combative and often-satirized news briefings.


In an interview with Fox News, Spicer said he stepped aside to “not have too many cooks in the kitchen” to convey Trump’s message.


Trump used the occasion of Spicer’s departure to lash out at the media, claiming his administration had “accomplished so much” and been “given credit for so little.”


“The good news is the people get it even if the media doesn’t,” Trump added.


Spicer’s resignation marked an escalation of tensions within an administration that has seen its legislative agenda falter at the same time it has been buffeted by an investigation into alleged collusion with Russia.


The Washington Post reported late Friday that Attorney General Jeff Sessions, contrary to his prior testimony, did discuss campaign-related and policy matters with Russia’s ambassador to Washington, citing intelligence intercepts.


The report will heap pressure on Sessions, who already was on the receiving end of a tongue-lashing by Trump over the Russia probe. The president suggested Sessions had betrayed him in stepping away from the investigation.


And in another blow, Mark Corallo — who was coordinating the Trump legal team’s public response to the Russia crisis — told AFP that he, too, had stepped down.


Neither Corallo nor Spicer have so far offered a rationale for their departures, but both step down as Trump wades into ever more perilous legal territory.


After months of denials, the White House was recently rocked by emails showing Donald Trump’s eldest son and two top aides met with a Russian lawyer in the belief they would get dirt on the Republican billionaire’s 2016 election rival, Hillary Clinton.


In response, Trump aides have floated the idea of pre-emptive presidential pardons and Trump himself has warned investigators not to look into his family finances.


“The president maintains pardon powers like any president would,” Sanders said during her first briefing as press secretary on Friday. “But there are no announcements or planned announcements on that front.”


Spicer’s decision appears to have happened quickly, with neither he nor Sanders giving any indication of changes afoot when they had drinks with a group of journalists on Thursday evening.


‘On track’
Scaramucci struck a collegial tone as he took questions from the press for the first time.


He dismissed reports of infighting, telling reporters: “I think the White House is on track.”


“I’ve seen this guy throw a dead spiral through a tire. I’ve seen him at Madison Square Garden with a topcoat on, standing in the key and hitting foul shots and swishing them. He sinks three-foot putts. I don’t see this as a guy who’s ever under siege.”


Spicer had been a close ally of chief of staff Reince Priebus, and his departure will likely weaken both Priebus and the bridge between the White House and the Republican Party establishment.


Scaramucci dismissed talk of a spat with Priebus, who White House sources said lobbied against his appointment.


“We are a little bit like brothers where we rough each other up once in a while, which is totally normal,” he said.


Priebus also downplayed any idea of a rift in an interview with Fox News.


Legal shake up
In an expansive interview with The New York Times earlier this week, Trump plunged his White House into fresh crisis when he attacked special counsel Robert Mueller, and warned him against looking at Trump family finances.


Mueller is examining whether Trump or his aides colluded with Russia’s apparent efforts to help tilt the 2016 presidential election in Trump’s favor.


With the investigation apparently extending to financial transactions, US media reported that Trump allies were looking for ways to discredit Mueller’s investigation.


Trump himself has suggested that Mueller -— a widely respected former FBI director —- may have a conflict of interest.


The White House has pointedly refused to rule out the possibility that Trump would fire Mueller — an act that would prompt a political firestorm and perhaps a constitutional crisis.


Republican House Homeland Security Committee chairman Michael McCaul warned Trump would face a “tremendous backlash response from both Democrats but also House Republicans” if he were to sack Mueller.


“Trump cannot define or constrain Mueller investigation. If he tries to do so this creates issues of constitutional and criminal dimension,” said former attorney general Eric Holder.


Trump has already fired his FBI director James Comey over the Russia investigation.


The top Democrat on the Senate’s intelligence committee, Mark Warner, warned that pardoning anybody who may have been involved in potential collusion “would be crossing a fundamental line.”