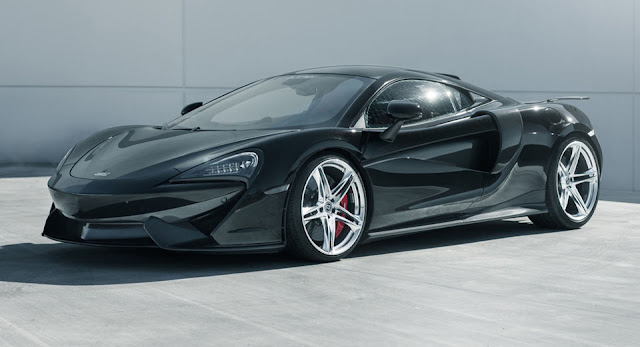 If you squint and look at a McLaren 570S, it is pretty remarkable how similar it looks to its big brother, the P1.


McLaren did this intentionally and passed design elements down its range, first to the 650S, then the 570S and then mixed them together with comprehensive changes for the 720S. In our eyes, it is the 570S and 570GT that remain the real lookers in the McLaren family and, adorned with a number of aftermarket parts, this 570S looks particularly special.


The clearest point of difference between this McLaren and a standard one is the set of chrome HRE wheels it sits on. With a relatively simple twin five-spoke design, they contrast the curved and flowing lines of the sports car and provide some additional aggression.


Beyond the wheels, the car stands out thanks to a bespoke rear wing, twin roof scoops, a sharper front end, new side skirts and carbon fiber attachments on the butterfly doors. As entry level models go, it’s hard to beat a 570S like this.
at July 30, 2017