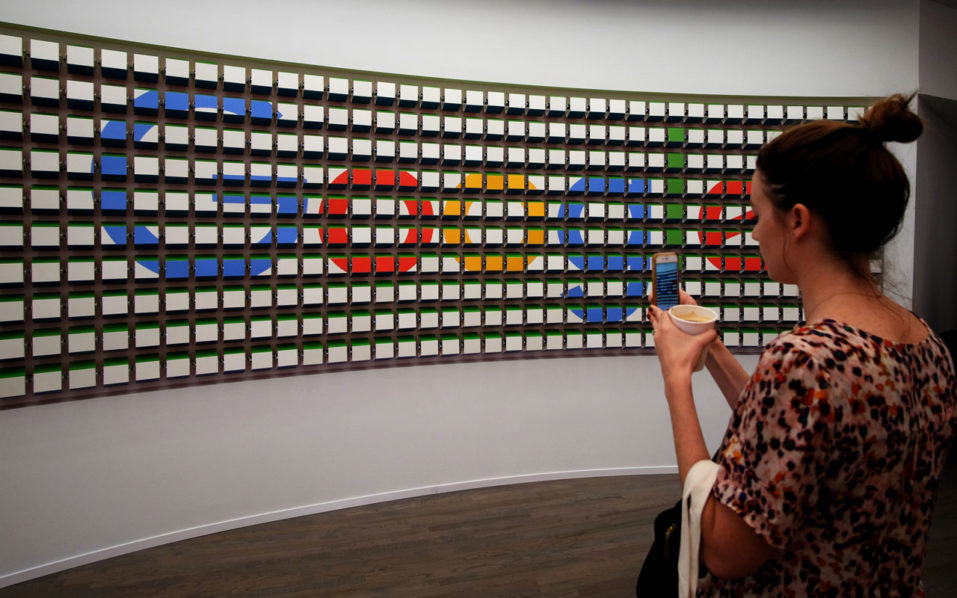 (FILES) This file photo taken on October 20, 2016 shows a woman taking pictures after the opening of Google’s pop-up store in New York. A trio of former Google employees on September 14, 2017, filed a lawsuit accusing the technology giant of paying women less than men for the same work. The lawsuit filed in a San Francisco state court on behalf of the three women accused Google of “systemic and pervasive pay and promotion discrimination against its female employees” in California.

A trio of former Google employees on Thursday filed a lawsuit accusing the technology giant of paying women less than men for the same work.


The lawsuit filed in a San Francisco state court on behalf of the three women accused Google of “systemic and pervasive pay and promotion discrimination against its female employees” in California.


Lawyers are seeking class-action status for the suit in a bid to represent more women currently or formerly employed at Google.


Responding to the lawsuit, the US technology giant denied any discriminatory policies.


“We work really hard to create a great workplace for everyone, and to give everyone the chance to thrive here,” Google spokeswoman Gina Scigliano said in response to an AFP inquiry.


“In relation to this particular lawsuit, we’ll review it in detail, but we disagree with the central allegations.”


Lawyers for the women accuse Google of violating California equal pay law along with the state labor code.


The complaint also alleged Google consistently assigned women to “lower tiers” or “job ladders” with lower compensation and fewer opportunities for promotion than their male counterparts.


Plaintiff Kelly Ellis said in a statement released by attorneys that the lawsuit addresses “a pervasive problem of gender bias at Google.”


Google’s Scigliano maintained that job levels and promotions at the company were determined through “rigorous” committees and undergo review that includes checking for gender bias.
“If we ever see individual discrepancies or problems, we work to fix them,” she said.


The suit comes with the US Labor Department auditing pay practices into possible gender discrimination.


It also comes as Google deals with the aftermath of a firestorm over sexism and free speech sparked by a “manifesto” published as an internal memo by then-employee James Damore.


The memo by a Google engineer defended the Silicon Valley gender gap, claiming that “biological differences” were a key factor in the low percentage of women in technology jobs.


The memo was leaked outside the company, and triggered outcry from those claiming it perpetuated stereotypes and discrimination.


The controversy came with Silicon Valley struggling in the face of accusations of rampant sexual harassment and discrimination affecting startups like Uber and venture capital firms investing in the sector.