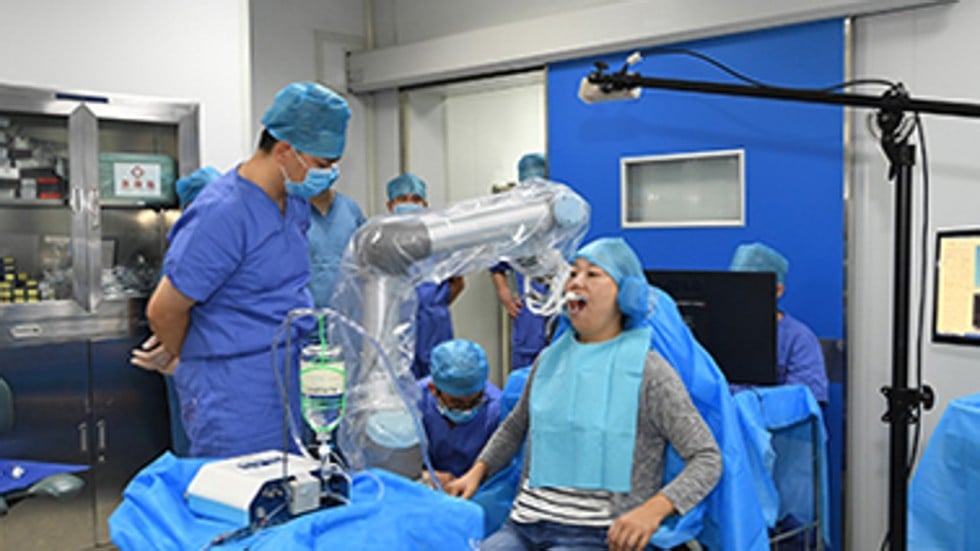 A robot dentist has carried out the first successful autonomous implant surgery by fitting two new teeth into a woman’s mouth, mainland media has reported.

Although there were human medical staff present during the operation, they did not play an active role while it was being carried out.

The one-hour procedure took place in Xian, Shaanxi, on Saturday, according to Science and Technology Daily.

The implants were fitted to within a margin of error of 0.2-0.3mm, reaching the required standard for this kind of operation, experts said.

The technology was designed to overcome mainland China’s shortage of qualified dentists and frequent surgical errors.

It was developed jointly by the Fourth Military Medical University’s affiliated Stomatological Hospital, based in Xian, and the robot institute at Beihang University in Beijing over the past four years.

According to Dr Zhao Yimin, the mainland’s leading oral rehabilitation specialist who works at the hospital, the robot combines dentists’ expertise and the benefits of technology.

It conducts the surgery by itself so it can avoid faults caused by human error.

The artificial teeth it implanted were created by 3D printing, he added.

An epidemiological survey has found there were about 400 million patients needing new teeth in China, but the number of qualified dentists was lagging behind demand.

Around one million implants are carried out across the country each year and the poor quality of the surgery that patients face can often cause further problems.

The report on the surgery pointed out that dental surgeons are working within a small space inside the mouth, including some areas that are hard to see, which often makes surgery difficult to carry out.

The use of robots could help get around that problem.

They then programmed the robot to move into the correct position to carry out the operation, and determined the movements, angle and depth needed to fit the new teeth inside a cavity in the patient’s mouth.

They then tested these movements and collected data to make the necessary adjustments before giving the woman a local anaesthetic and carrying out the operation.

During the operation, the robot was able to make adjustments in line with the patient’s own movements.

In recent years robots have increasingly been used to assist dentists with procedures such as root canal surgery and orthodontic operations as well as in training students.

In March this year the US Food and Drug Administration approved the use of a robot system named Yomi designed to assist human surgeons when fitting implants.
at September 24, 2017