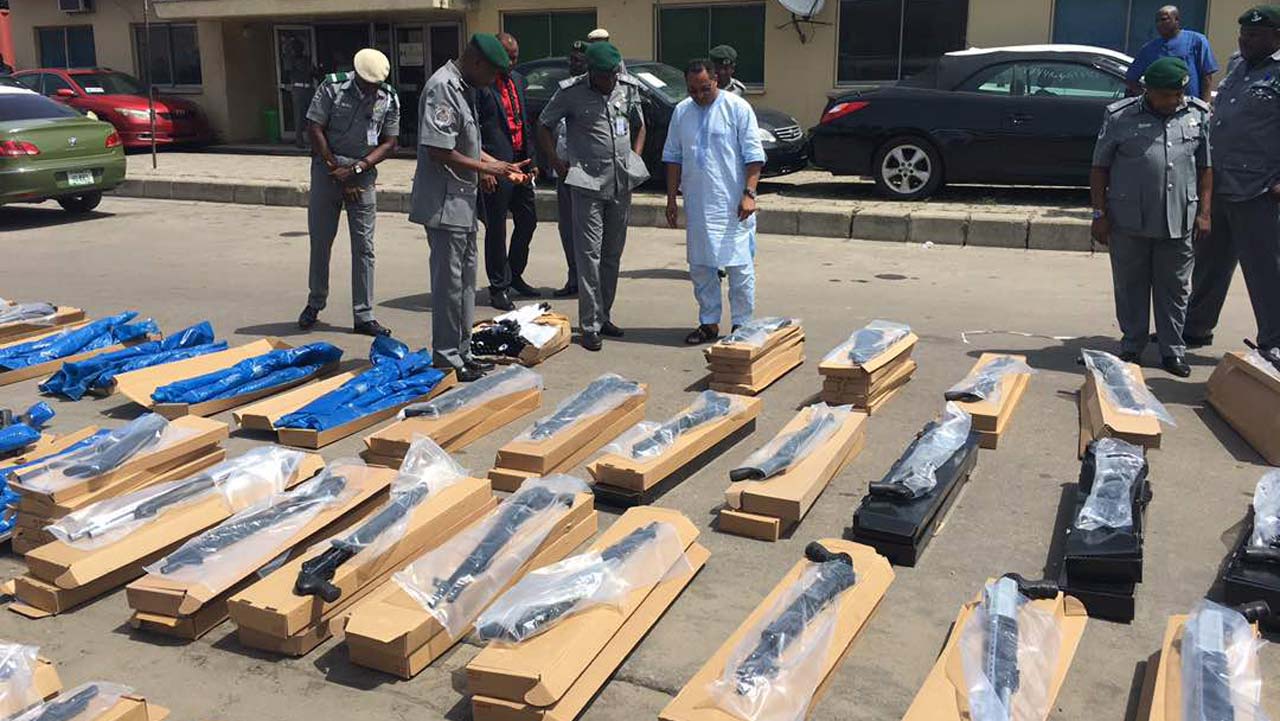 Hameed Ali, yesterday announced the seizure of another 470 pump action rifles smuggled into the country through the Tin Can ports in Apapa, Lagos.

Begins 100 per cent cargo examination
The Comptroller-General of the Nigeria Customs Service (NCS), Hameed Ali, yesterday announced the seizure of another 470 pump action rifles smuggled into the country through the Tin Can ports in Apapa, Lagos.


Consequently, the NCS has placed all the nation’s gateways, including the seaports, land borders and airports, on red alert to checkmate the smuggling of arms and ammunition into the country.


Ali has therefore directed all customs formations at the gateways to be on the alert and ensure a 100 per cent examination of cargoes entering the country.


Apparently worried about the rising rate of arms smuggling, the comptroller-general said the situation had forced the customs to look beyond the ease of doing business policy directive of the Federal Government, in order to ensure the security of lives and property of the citizens.


According to him, the arms were concealed in a 20-foot container with No. CMAU189817/8 falsely declared as elbow plumbing plastics on its bill of lading. The importer of the cargo is Great James Oil and Gas Limited, and the vessel is MV Arkas Africa owned by Hull Blyth.


Ali said: “Sadly, I am back here. Despite all the seizures that have been made in the last eight months, these syndicates have not relented in bringing these deadly weapons into our country.


“Having developed the profile of most important items coming from Turkey, the controller of Tin Can Island Customs command, Bashar Yusuf, had insisted on a 100 per cent examination of any container that comes in. The result is what we see on the ground.


“It is an understatement to say that we are being threatened as a country and our findings have shown that this dastardly act is perpetrated by Nigerians. There are syndicates who are in Turkey and manifesting this. We are yet to get to the bottom of the whole thing. Are these meant for commercial purposes? Are they meant to be used by insurgents, agitators as they called themselves, or kidnappers? That aspect of the investigation is going on and I am sure that the State Security Service and other agencies will unravel these,” he said.


Ali promised the NCS would leave no stone unturned in taking the issues beyond the boarders of Nigeria. “Tomorrow (today) we will be having the first diplomatic meeting with the ambassador of Turkey basically on this issue. Already, our president has discussed this at an international forum and he has been mandated to speak with us and assist us to find the way forward,” he said.


He lamented that about 80 per cent of importation comes under false declaration. “That is why we find it difficult to effectively execute the ease of doing business, because if we speed up clearance and depend on the document, these are what we will be unleashing on our society. We have to subject the containers to a100 per cent examination and that delays the honest people’s goods.”


According to the customs boss, unless Nigerians begin to do the right thing and be honest in their business dealings, it would be difficult to ensure the ease of doing business. “That is the fact because if we do apply that, this is what we will end up with and I don’t think we want to shy away from doing our duty because we want to clear goods faster. The safety and wellbeing of Nigerians is more important. The security of this country is more important to Nigeria Customs Service than the money we will collect in terms of duty.”


According to Ali, arms and ammunition are under prohibited items. “Aside from arms and ammunition posing a serious challenge to national security, 80 per cent of illicit goods coming into the country are often intercepted by customs under false declaration. Therefore, we need the best technology to detect such items in order to prevent them from going into wrong hands.”


The Customs Area Controller (CAC) of the command, Bashar Yusuf, said the seizure of the rifles was made possible through accurate data profiling of the cargo right from the sea.


“Container profiling is quite imperative in customs operations, because through this means, we were able to track the arms from the vessel in the sea and intercepted the items at the entry point.