Trial shows GM techniques can be used to increase efficiency of photosynthesis, a finding which could help meet the global demand for food. 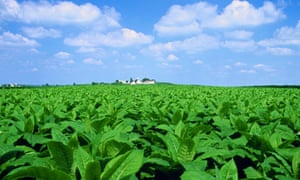 Genetically modified (GM) plants designed to use light more efficiently produced a 20% greater yield in a study that could have significant implications for global food supplies.

The field trial, which used tobacco plants, is the first to show that GM techniques can be used to boost the basic efficiency of photosynthesis, potentially offering substantial gains across almost all food crops in the future. Until now many scientists had doubted this would be possible.
The scientists believe the finding could help meet the global demand for food, which is projected by the UN to rise by 70% by 2050.

Professor Stephen Long, who led the work at the University of Illinois, said: “We don’t know for certain this approach will work in other crops, but because we’re targeting a universal process that is the same in all crops, we’re pretty sure it will.”
Previously, GM techniques have been used to produce crops that are pest-resistant, disease-resistant or less sensitive to herbicides, but this is one of the first demonstrations of a crop’s basic efficiency being improved.

Professor Jonathan Jones, who works on GM crops at the Sainsbury Laboratory in Norwich and was not involved in the latest study, said the size of the gains reported were impressive. “That’s not the kind of thing you normally see,” he said.

Long’s team started out by simulating the entire process of photosynthesis, the process that converts sunlight into chemical energy, to identify where potential gains could be made.
They decided to target a process that plants use to shield themselves from bright sunlight. 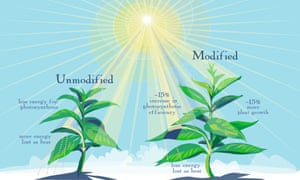 “Crop leaves exposed to full sunlight absorb more light than they can use,” Long said. “If they can’t get rid of this extra energy, it will actually bleach the leaf.”

Chemical changes within the leaf allow the excess energy to be dissipated as heat, in a process called nonphotochemical quenching (NPQ). While plants switch on the quenching mechanism almost instantaneously – similar to the way in which the pupil in the human eye contracts in bright light – it takes much longer for it to switch off again.

“When a cloud crosses the sun, or a leaf goes into the shade of another, it can take up to half an hour for that NPQ process to relax,” Long said. “In the shade, the lack of light limits photosynthesis, and NPQ is also wasting light as heat.”

Computer simulations suggested that the energy wasted after quenching reduces overall crop productivity drastically, by 7.5 to 30%, depending on the plant type and sunlight conditions.
The scientists modified three genes with the aim of increasing the levels of three proteins that could help ramp up the efficiency of photosynthesis more quickly after exposure to bright sunlight.
They grew seedlings from multiple experiments and selected the three best strains, based on how they responded to changes in light conditions. These were then grown in several field plots alongside standard tobacco plants.

Two of the GM strains consistently showed 20% higher yields and the third was 14% higher, in terms of the weight of dry leaves harvested. The plants also had bigger leaves, were taller and had heavier roots.

The team have now been funded by the Gates Foundation to introduce similar modifications in major food crops, starting with rice, soya bean and cassava.

If a relatively simple gene modification can improve the efficiency of photosynthesis, it might appear surprising that plants have not just evolved this genetic trait by themselves. However, outside agricultural settings, photosynthesis is not the factor that limits plants growth, according to Jones.

“Most plants grew in an environment where the limiting factor was nitrogen available, not photosynthesis,” he said.

The findings are published in the journal Science.
at November 23, 2016