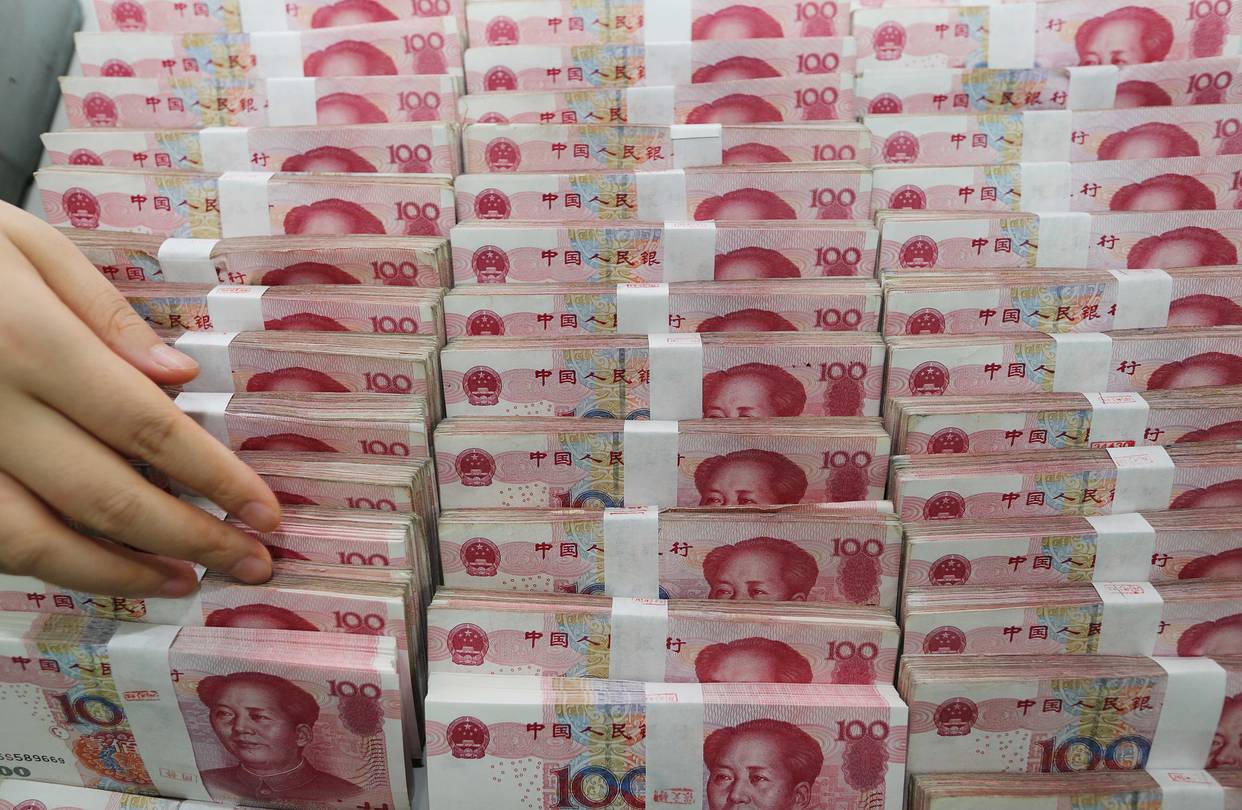 Chinese yuan notes at a bank in Lianyungang city, in the province of Jiangsu, in August. The government seeks to stem the flow of capital offshore.
BEIJING—China plans to clamp tighter controls on Chinese companies seeking to invest overseas, intensifying efforts to slow a surge in capital fleeing offshore amid tepid growth and an uncertain economic outlook. The State Council, China’s cabinet, will soon announce new measures that subject many overseas deals to reviews of “strict control,” according to people with direct knowledge of the matter and documents reviewed by The Wall Street Journal.

Targeted for particular scrutiny by the pending measure are “extra-large” foreign acquisitions valued at $10 billion or more per deal, property investments by state-owned firms above $1 billion and investments of $1 billion or more by any Chinese company in an overseas entity unrelated to the investor’s core business.

While the government has been plugging holes to keep more money at home in recent months, the new measures are the first to go after big deals by China Inc.

In doing so, the controls underscore Beijing concerns about capital flight and a weakening currency. They also come amid an overseas buying binge by Chinese companies. Total overseas direct investment rose more than 50% to $145.9 billion in the first nine months of this year from the same time a year earlier, according to official data.

Chinese companies have been moving to scoop up needed technology and management expertise—much of it at Beijing’s blessing. Headline-grabbing deals include petrochemical giant China National Chemical Corp.’s pending $43 billion acquisition of Swiss pesticide maker Syngenta AG, and a bevy of real estate, finance and other investments by Anbang Insurance Group Co., a recently obscure company that has emerged as global deal maker.

In all, Chinese buyers have announced $212.7 billion of overseas acquisitions in 2016, a year in which announced global deal volume has reached $3.28 trillion.

Concerns have grown among officials that the investment splurge may in some cases serve as a cover for getting around capital controls and sending money overseas. “Greater caution definitely is warranted when it comes to what kind of overseas direct investment is allowed and which ones aren’t,” said a senior government adviser in Beijing.

The State Council’s information office did not immediately respond to a request for comment on the new measures. The new controls will apply to deals yet to receive approval from China’s top economic planning agency, the people familiar with the matter say.

The new controls, once in place, are to remain in effect until the end of September and thus are intended as a temporary tool to stabilize outflows ahead of a major reshuffle of the top echelon of the ruling Communist Party late next year, the people familiar with the matter said. That’s in keeping with other efforts by Beijing to try to keep the economy on an even keel before the leadership change.
China has been a magnet for foreign capital in recent decades, bolstering the economy. In the past couple of years, however, money has been flowing out as the long economic boom ebbs and the consumerism and services expected to drive new growth have yet to gather momentum.

A steady depreciation of the Chinese yuan, after years of overall strength, has ensued, and as businesses and individuals try to take more money out, the pressure for further weakening is piling on. In the past week the yuan has fallen to its lowest level against the dollar in eight years.
The country’s foreign-exchange reserves plunged $45.7 billion in October from September to $3.12 trillion. The Institute of International Finance, a Washington-based group of financial institutions world-wide, estimates that net outflows doubled to $207 billion in the third quarter from the previous three months. That figure is just shy of the estimated record $226 billion in outflows in the third quarter of last year.

Since then, authorities have sought to buttress the country’s financial borders, mostly by curtailing options for individuals to invest overseas. Those measures included a suspension of a quota-based program intended to allow more Chinese to buy foreign stocks and bonds and a ban on purchasing most types of foreign insurance policies with domestically-issued credit cards.

Attention on outbound investments has broadened recently. Officials at China’s foreign-exchange regulator warned in September that some companies as well as individuals may have fabricated deals as a way to circumvent capital controls and move money offshore.

Earlier this week, the central bank announced it will use a new risk-control system to monitor capital flows through Shanghai’s much promoted free trade zone, which previously was hailed as a bold experiment to liberalize China’s financial markets.

A five-page action plan released by the Shanghai branch of the People’s Bank of China stresses efforts to ensure that currency inflows exceed outflows in the zone—a backhanded suggestion that more money may be moving out of the zone than coming in.

The soon-to-be announced controls empower the Commerce Ministry and the top economic planning agency to take a closer look at larger deals, the people familiar with the matter said.
Under the current rules, companies trying to undertake many of the targeted transactions in foreign markets only need to register with the authorities and don’t have to go through any lengthy approval process.

Aside from the major transactions, other deals covered by the pending rules are: overseas direct investments made by limited partnerships, investments in overseas-listed companies that are less than 10% of those firms’ total equity, and Chinese capital trying to participate in the delisting of overseas-listed Chinese companies.