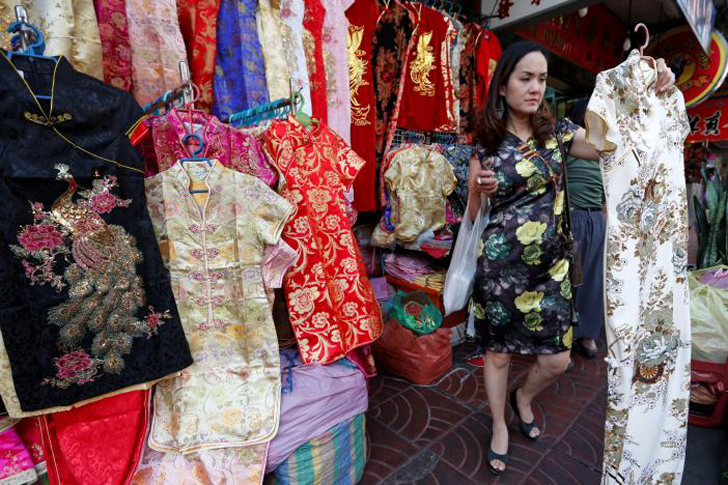 But this year, donning colorful clothes could be seen as disrespectful in a country where many are still wearing black, white or grey as a sign of mourning for King Bhumibol Adulyadej, who died on Oct. 13 last year.

The traditional mourning period of 100 days ended last Friday, but the transition back to color has been slow.

The year-long mourning for government officials is not mandatory for all Thais, but most people shopping for new clothes in Bangkok are still in monochrome.

Bangkok resident Suvannee Suttilertkun said she would be wearing a black traditional dress with gold embroidery for Lunar New Year.

"It is because we still have to show respect that we are mourning King Rama IX," she said, referring to King Bhumibol by his formal title.

King Bhumibol was the world's longest-reigning monarch after seven decades on the throne and was revered as semi-divine by many Thais. He was succeeded by his son, King Maha Vajiralongkorn, in December.

Some Thais, like Tanagrit Leartskritanapa, have chosen to stick with bright red for Lunar New Year.

"Most of the people understand this is for Chinese New Year, that we have to wear bright auspicious colors to bring luck into our lives," the 60-year-old said.

"At the same time, deep in our hearts, we feel sorrow and we don't forget our king, because he's still living in our hearts."

Many shopkeepers in Chinatown said there had been a drop in sales of red clothes, but they have offered more alternatives in gold, silver and black.
Ethnic Chinese number more than 9.3 million in Thailand, making up about 11 percent of the population, according to 2012 data quoted by the Institute for Cultural Diplomacy, an international body based in Berlin.

But the numbers exclude those of partial ethnic Chinese ancestry, who also consider themselves to be Thai Chinese and celebrate Lunar New Year.

S.P. Somtow, a Thai-American author and social critic, said most Thai Chinese speak Thai and are well-integrated in society. He did not think wearing red would cause tension during the festive season.

"The mourning for a year is not mandatory, and people know that Chinese New Year is coming. It is a big thing here," he said.