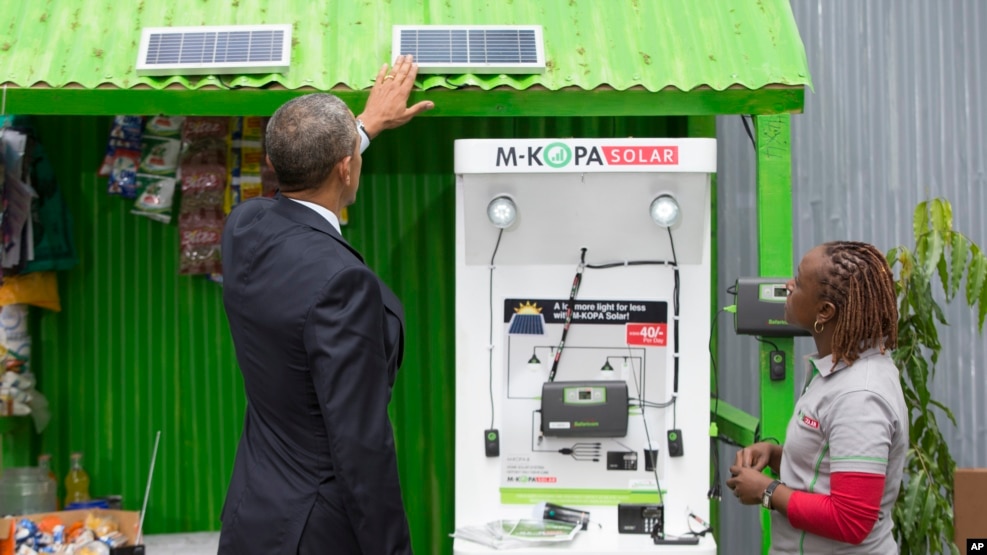 FILE - Then-President Barack Obama looks at a solar power exhibit during a tour of the Power Africa Innovation Fair, July 25, 2015, in Nairobi, Kenya. With technical help from the U.N. Industrial Development Organization, a cooperative in Olosho-Oibor installed solar panels on poles around the community and on rooftops. It has installed two small wind turbines as well.

When the first few residents of this village in the Ngong hills installed solar panels nearly a decade ago, the only aim was to power their own homes. Their town had no connection to the national power grid.

But today the community, south of Nairobi in the Rift Valley, is buzzing with solar and wind energy, which powers everything from the dispensary and church to shops, homes and even a rescue center for girls fleeing child marriage and the threat of female genital mutilation.

Residents say they banded together to buy the shared energy system themselves, recognizing that the substantial upfront cost would create benefits for years to come. Those now include everything from vaccines that can now be kept cold at the dispensary to solar-powered pumping of water.

"Before we started this solar farm, people from this village used to travel to Ngong town, which is 17 kilometers away, to get basic services and goods such as a photocopy or a haircut. This used to inconvenience us greatly, since you had to part with a tidy sum," said Simon Parkesian, the manager of the community's solar farm.

Residents chipped in
In 2009, some residents of Olosho-Oibor, impressed with the first couple of private solar panels installed in the community, decided they wanted panels of their own, but many people could not afford them.

So a group of community members began contributing $10 a month each until they had enough to buy a set of larger solar panels that could serve many nearby homes.

They then approached the U.N. Industrial Development Organization for technical help in installing their system.

Today, the 125-member energy cooperative has raised $4,900 for panels installed on poles around the community and on rooftops and has installed two small wind turbines as well.

The community also has a 10-kilowatt diesel generator as a backup in periods when sunshine and wind fall short, Parkesian said.

Lydia Mboyo, one of those receiving power from the community energy farm, said having lights in the evening has helped her children study and has allowed her to run her small retail shop at night.
She now is planning to expand her shop and buy a refrigerator to store perishable food and drinks.

"I am also a member of a women's group that makes and sells beaded ornaments abroad, and with lighting we have been able to store our business records in computers. We also listen to the radio for entertainment while beading," Mboyo said.

Technology center
Parkesian said access to power also has spurred creation of a community information and communications technology center that has trained more than 40 people in basic computer skills, and that now offers photocopying and printing services.

The center also allows people to charge their mobile phones, which once had to be switched off to save power when not being used to make calls.

As well, the renewable energy network is powering a center for vulnerable girls fleeing early marriage and female genital mutilation, "both problems common in the area," Parkesian said.

"The power grid has initiated many projects in the community, but the most important project is the girls' rescue center that houses close to 80 vulnerable girls," he said. The center, opened in 2012, uses renewable energy to light its dormitories and classrooms.

Jackline Mwendo, a nurse at Olosho-Olbor dispensary, said her facility has been able to offer vaccine services since it got power to provide refrigeration.

The dispensary's water supply has also improved as a result of using solar-powered pumps, she said, though she is still hoping for additional power to light maternal delivery rooms at night.

Parkesian said the cost of maintaining the renewable mini-grid has been significant, and community members have needed to contribute $5 a month for continuing access to power to help pay those costs.

Technical knowledge needed
Members of the energy cooperative have been trained to repair and replace worn-out parts of wind turbines and solar panels, he said. But many repairs require technical knowledge not available in the village, which increases costs and can lead to the system not working for short periods.

Running the community's diesel generator to provide backup lighting at night costs $10 per day, he said.

Leah Kaguara, the Africa director for Energy 4 Impact, a nongovernmental organization that supports energy access in off-grid communities, said Olosh-Oibor's model of people pulling together to invest in renewable energy should be encouraged, in part to overcome the technology's high upfront costs.

Access to energy is key to eradicating extreme poverty in areas where people still rely on firewood or kerosene for energy, she said.

One key to making community renewable energy systems work, she added, is that people should continue to pay at least a small amount for the power they receive, including to support maintenance costs.