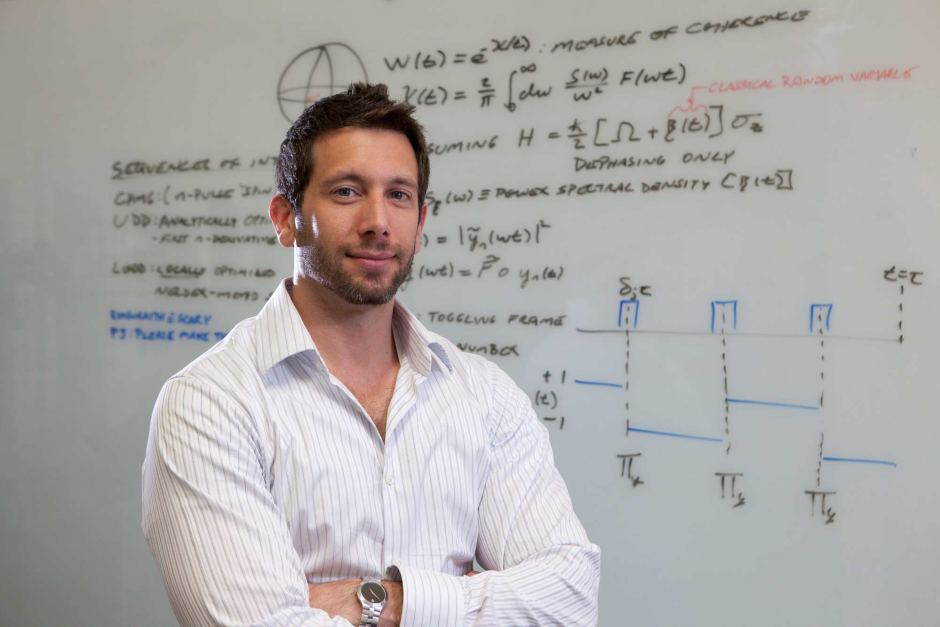 Michael J. Biercuk is a physicist working to harness the strangest rules of quantum mechanics as a resource powering a new generation of quantum technologies. These technologies may even allow us to see into the future.

The software platforms we use every day operate on hardware that takes decades of research to develop. But what if we could build that technology faster and smarter? Michael J. Biercuk is a technologist and physicist working at the forefront of quantum science, He believes that quantum computing may provide a profound transformative swing to that way that we build technology, atom by atom, electron by electron.

According to Biercuk, as remarkable as our present microprocessor technology is, it is still just the result of the processes that is still akin to machining the tooth of a gear out of brass. The precision of this top-down fabrication, while impressive is about to be blown away.

Individual atom construction will be the building blocks of new technologies that are not only smaller and more compact, but behave according to the laws of quantum physics. In simplistic terms this means that materials will no longer be able to be considered as being made up of atomic billiard balls, but of waves.

"Now we are learning how we can control and harness these phenomena as resources powering a new generation of technologies, much the way we use the flow of electricity to power our technology today," he states.

He briefly explains how his experiments in quantum simulation using 300 atoms of beryllium, occupying less than a square millimeter can yield the equivalent computational power as a Turing machine that were constructed out of all the matter in the known universe.

Such technology is even pushing us farther into the realm of science fiction.

In a recently published paper in the journal Nature Communications, Biercuk and his colleagues have demonstrated the ability to "see" the future of quantum systems, and used that knowledge to preempt their demise, in a major achievement that could help bring the strange and powerful world of quantum technology closer to reality.

The physicists have taken a technical quantum leap in addressing a major obstacle to building reliable quantum technologies—decoherence, or the randomisation of quantum systems by their environments— which effectively destroys the useful quantum character. The researchers used machine learning techniques to predict how quantum systems will change and then preventing the system's breakdown from occurring.

Biercuk is a quantum physicist and technologist at the University of Sydney, and a Chief Investigator in the Australian Research Council Centre of Excellence for Engineered Quantum Systems (EQuS). His own group – the Quantum Control Laboratory – is discovering how to power a new generation of advanced technologies using the strangest rules of quantum physics.

Biercuk highlighted the challenges of making predictions in a quantum world: "Humans routinely employ predictive techniques in our daily experience; for instance, when we play tennis we predict where the ball will end up based on observations of the airborne ball," he said.

"This works because the rules that govern how the ball will move, like gravity, are regular and known. But what if the rules changed randomly while the ball was on its way to you? In that case it's next to impossible to predict the future behavior of that ball.

"And yet this situation is exactly what we had to deal with because the disintegration of quantum systems is random. Moreover, in the quantum realm observation erases quantumness, so our team needed to be able to guess how and when the system would randomly break.

"We effectively needed to swing at the randomly moving tennis ball while blindfolded."

What might look like random behavior actually contained enough information for a computer program to guess how the system would change in the future. It could then predict the future without direct observation, which would otherwise erase the system's useful characteristics.

The predictions were remarkably accurate, allowing the team to use their guesses preemptively to compensate for the anticipated changes.

Doing this in real time allowed the team to prevent the disintegration of the quantum character, extending the useful lifetime of the qubits.

"We know that building real quantum technologies will require major advances in our ability to control and stabilise qubits - to make them useful in applications,"  Biercuk said.

"We're excited to be developing new capabilities that turn quantum systems from novelties into useful technologies. The quantum future is looking better all the time," Professor Biercuk said
at January 26, 2017