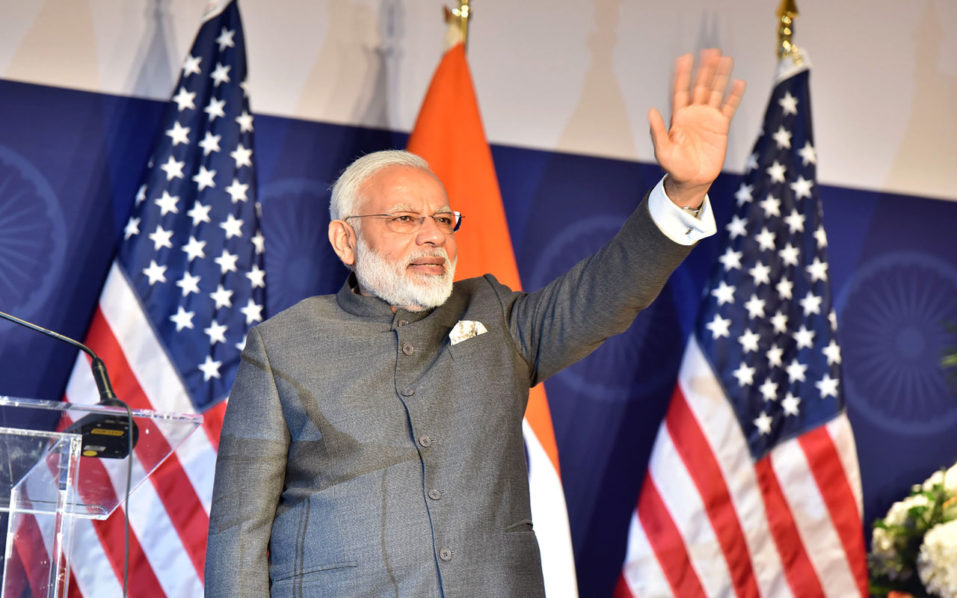 This handout photograph from the Indian Press Information Bureau (PIB) taken on June 25, 2017 shows Indian Prime Minister Narendra Modi attending a reception to meet members of the Indian community in the United States, in Washington DC on June 25, 2017.

Donald Trump hosts Indian Prime Minister Narendra Modi on June 26 for a first tete-a-tete aimed at building a personal rapport in spite of very real divergences between the two leaders, whether on climate change or immigration./ AFP PHOTO / PIB /

US President Donald Trump hosts Indian Prime Minister Narendra Modi on Monday for a first face-to-face meeting, seeking to forge a chemistry that can add new fizz to a flourishing relationship between the world’s two largest democracies.


Despite differences over issues such as immigration and climate change, Modi is expected to assure Trump that the US has nothing to fear from India’s growing economic clout.


Trump, who described Modi as a “true friend!” on Twitter after the Indian leader’s weekend arrival in the US, should find much in common with the Indian leader, with both men having won power by portraying themselves as establishment outsiders.


While ties with some of Washington’s traditional allies have been strained by Trump’s complaints that the US has been the loser in trade agreements, Modi appears alert to his host’s sensitivities and emphasis on transactional diplomacy.


Writing in a Wall Street Journal editorial published just ahead of their meeting, Modi said that in “an uncertain global economic landscape, our two nations stand as mutually reinforcing engines of growth and innovation.”


India is currently the world’s fastest growing major economy, a status that Modi is hoping to cement by drawing in more foreign investment — in part by encouraging manufacturers to do business in Asia’s third-largest economy.


“The transformation of India presents abundant commercial and investment opportunities for American businesses,” said Modi whose government is about to implement a new nationwide tax system designed to scythe through red tape.


“The rollout of the Goods and Services Tax on July 1 will, in a single stroke, convert India into a unified, continent-sized market of 1.3 billion people,” he wrote.


Day of meetings
Ahead of his talks with Trump, Modi is also expected to meet with Secretary of State Rex Tillerson and Defense Secretary Jim Mattis as India eyes the purchase of more military equipment from the US.


After an Oval Office meeting mid-afternoon, the leaders will dine together at the White House, though no press conference is scheduled.


That decision — a contrast with high-profile visits from other leaders including Japanese Prime Minister Shinzo Abe — may reflect a White House effort to avoid a flurry of questions over the probe into suspected Russian meddling in the 2016 election, which has dogged Trump’s young administration.


Relations between India and the US were generally cool until the 1990s but they warmed under Trump’s predecessor Barack Obama, as India sought greater foreign investment and trade ties.
But it was not long after Trump’s election that obstacles emerged on issues such as trade and visas for Indians wanting to work in the United States.


Then Trump accused India of seeking to profit from the Paris climate accord as he announced the US withdrawal from the deal this month — drawing sharp denials from New Delhi.


A proposed overhaul of H-1B visas — used by thousands of Indian software engineers to work in the United States — has also caused concern in New Delhi.


But Indian officials have played down those differences, insisting that Modi was sensitive to his counterpart’s concerns over American jobs and trade, and there were “no major sticking points” that could sour the talks.


“If there’s one thing we want (from the talks), it’s chemistry… If the chemistry is good, then frankly everything else gets sorted,” a senior Indian official who is traveling with the prime minister told reporters in Washington.


Afghanistan on agenda
Regional security is expected to be high on the agenda as Washington considers deploying up to 5,000 extra troops in Afghanistan to help local forces fighting insurgent groups and seeks to encourage what an administration official describes as India’s “positive role” in the country.


Trump’s administration has meanwhile indicated it could take a tougher stance on Pakistan, which India has long accused of harboring militant groups.