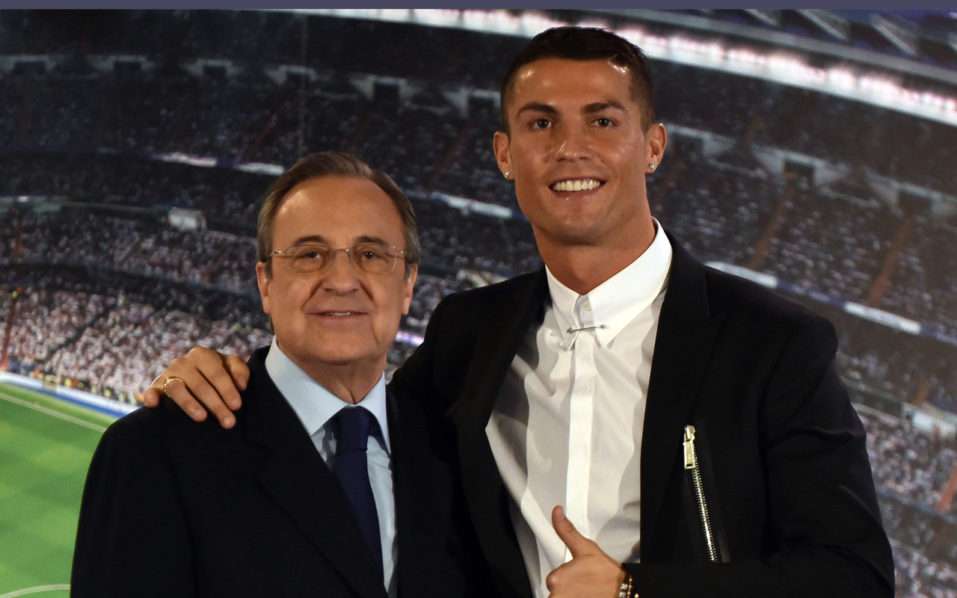 Florentino Perez’s first task after being re-elected unopposed as Real Madrid president will be to appease superstar Cristiano Ronaldo amid speculation the four-time world player of the year wants to leave. / AFP PHOTO / GERARD JULIEN

Cristiano Ronaldo will be staying at Spanish giants Real Madrid and no offer has been received to tempt him away, club president Florentino Perez insisted Tuesday.


Unhappy Ronaldo has been linked to Manchester United and other top clubs after reportedly threatening to leave Real and quit Spain after running into problems with tax authorities.


“Ronaldo is a Real player and will continue to be so as far as we are concerned,” Perez told Marca sports daily Tuesday. “No offer has been received for him.”


According to media reports Ronaldo is unsettled at Madrid because he believes Real did not back him as fully as he had hoped in his dispute with the taxman.


And he has also complained on multiple occasions in the past at his treatment at the hands of Real supporters, who have resorted to jeering and booing his performance on the pitch.


In an earlier report Marca said Ronaldo has told his teammates he was leaving and “there is no turning back”.


Portuguese sports daily A Bola had also claimed that Perez had already been informed of the 32-year-old’s decision.


However, Perez said that he had not spoken to Ronaldo, who is on duty for Portugal at the Confederations Cup in Russia, which ends on July 2.


Even so, Perez said he was convinced Ronaldo would stay and affirmed that his Real contract was protected by a one billion euro release clause.


“I have not spoken with him. We don’t want to disturb his concentration with the national team,” said Perez.


“But something really bizarre would have to happen if he were to leave this club.”


Perez said he could understood why the four-times world player of the year had been upset after he was accused last week of evading 14.7 million euros in tax through offshore companies.


Big challenge
He said that Ronaldo had clearly done nothing wrong and Perez was appalled that the “presumption of innocence is not respected” by the media who have branded the played a delinquent.


Perez, a 70-year-old construction magnate, was elected unopposed Monday for a third term in charge of Europe’s most successful club.


His first big challenge is keeping Ronaldo at the club he joined in 2009 from Manchester United for a record 94 million euros ($105.3 million).


There has been speculation that Ronaldo is trying to put pressure on Real so that they will bear some of the burden of an eventual fine for tax evasion as Barcelona did for Lionel Messi.


Manchester United have so far made no comment on reports they are interested in buying back the player for an estimated 200 million euros, on top of the release fee.


Since extending his contract in November until 2021, Ronaldo is according to Forbes the highest paid sports star in the world with $93 million (83m euro) in 2016-2017.


Paris Saint-Germain and Chelsea are also reported to be interested but Bayern Munich president Karl-Heinz Rummenigge denied the German champions would make an offer.


“We are accustomed to intensive speculation on possible arrivals and departures during the transfer period,” wrote Rummenigge in the statement.


“As a rule, we do not comment on these rumours. But now in the case of Cristiano Ronaldo, we want to clarify once and for all that this rumour has no basis and must be referred to in the realm of fables.”