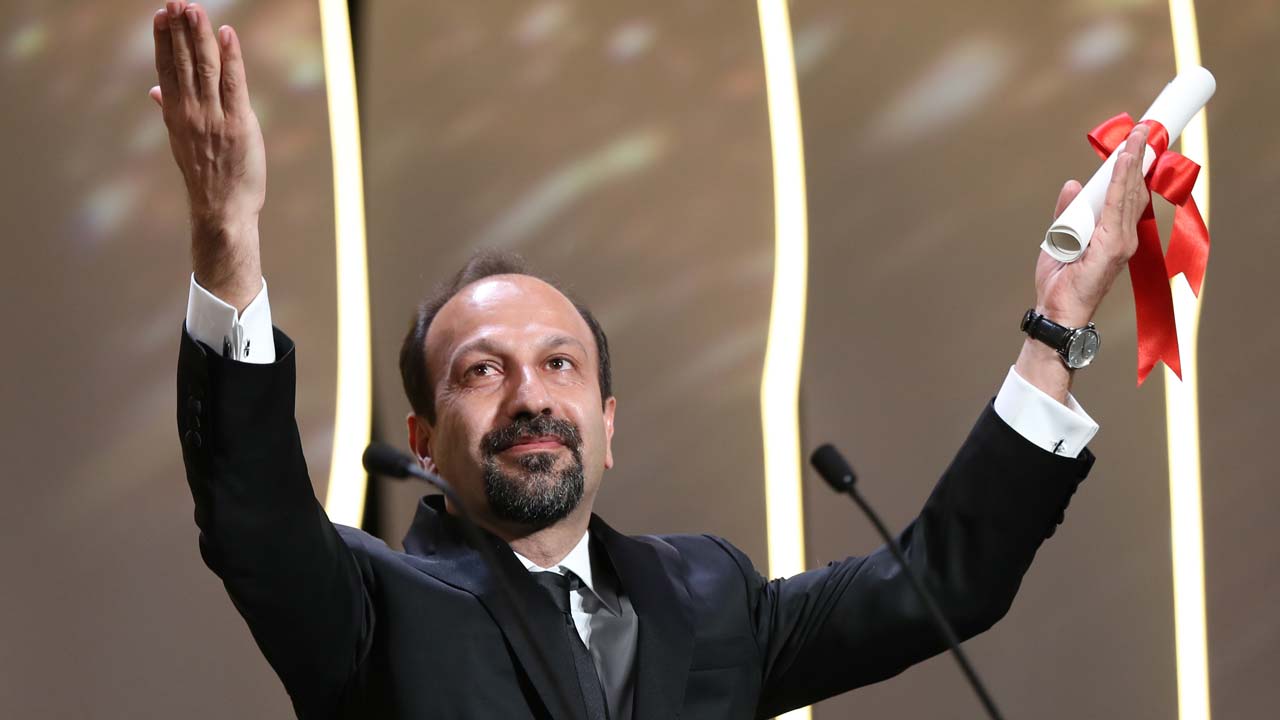 (FILES) This file photo taken on May 22, 2016 shows Iranian director Asghar Farhadi celebrating on stage after being awarded with the Best Screenplay prize for the film “The Salesman (Forushande) during the closing ceremony of the 69th Cannes Film Festival in Cannes, southern France. Oscar-winning Iranian director Asghar Farhadi said January 29, 2017y he will not attend next month’s Academy Awards, comparing President Donald Trump’s visa ban on seven Muslim countries to the actions of hardliners in his own country. Farhadi, nominated for Best Foreign Language Film for “The Salesman”, said in a statement carried by Iranian news agencies that he had initially planned to attend the ceremony in Los Angeles, but had been forced to change his mind. PHOTO: Valery HACHE / AFP.

Thousands of film fans gathered in London’s Trafalgar Square Sunday for a screening of “The Salesman” by Iranian director Asghar Farhadi, who is boycotting the Oscars over US President Donald Trump’s policies.

Just hours before the Oscars ceremony in Los Angeles, where the film is vying for the Best Foreign Language Film award, the London landmark was transformed into a giant open-air cinema.

“Despite our different religions, nationalities and cultures, we are all citizens of the world. I’m very proud to be a member of this global family. I’m sorry I’m not able to be here with you but I will be there in spirit,” Farhadi said in a video message played ahead of the film.

“At a time when people are talking about travel bans, I want to welcome people,” he said.

“At a time when people are motivating communities to divide, I want to unite them.”

Farhadi announced last month that he would not attend the ceremony even if the US government gave him special permission to travel despite coming from Iran, one of the countries on Trump’s controversial list.

The Iranian filmmaker stuck by his decision even after a US court ruled against the travel ban.

An estimated 10,000 spectators attended the screening, which was also the British premiere of the film, according to the mayor’s office.

One of the crowd, Amir Alamdara, said the event helped boost the profile of Iranian cinema.

“It galvanises people and it makes people more aware that Iranians have got something to offer to this world,” he told AFP.

Tanya Arafeh, a Palestinian, said she enjoyed the sense of unity in the central London square.

“I feel proud and empowered, I love the fact that everyone has come together to support each other and also just to have a nice day in London,” she told AFP.

British director Mike Leigh addressed the crowd, saying the screening should be both a protest and a celebration.

“Our protest is of course against President Trump’s cynical, divisive and destructive policies, especially this unforgivable travel ban,” he said.

The film was followed by a mini concert by The Orchestra of Syrian Musicians, who were joined by former Blur frontman Damon Albarn.

Around 50 film personalities, including Ridley Scott, Kiera Knightley, Terry Gilliam, Glenn Close and Julie Christie, signed a letter asking that the film be screened in front of the US Embassy in London.

Farhadi’s “The Salesman” is up against four other nominees in the foreign language category at the Oscars, three of which are European.

The Iranian movie will be competing against the Danish film “Land of Mine”, “Toni Erdmann” from Germany and the Swedish “A Man Called Ove”. Australia completes the foreign language set with “Tanna”.

On Friday, directors of the five nominees issued a statement condemning “the climate of fanaticism and nationalism” in the US
at February 27, 2017