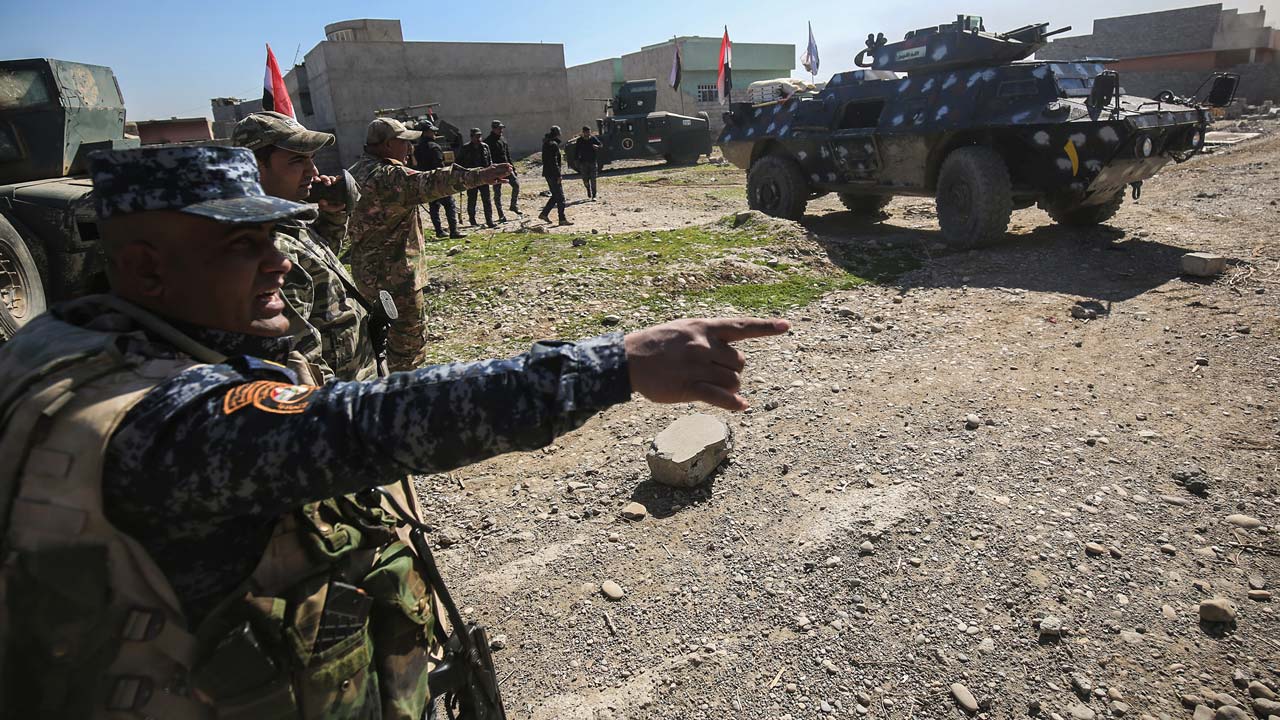 Iraqi forces advance towards Dindan neighborhood in the western half of the northern city of Mosul, as part of the offensive to retake the area from Islamic State (IS) group fighters, on February 25, 2017.

The west bank of Mosul is where Abu Bakr al-Baghdadi made his only public appearance as IS leader in July 2014 and proclaimed a “caliphate”, which at its greatest extent controlled a third of Iraq, but after more than two years of a government fightback it has become the last major jihadist bastion in the country.<br />AHMAD AL-RUBAYE / AFP

Iraqi forces battled jihadists in west Mosul Sunday, aiming to build a floating bridge across the Tigris to establish an important supply route linked to the recaptured east bank.

A week into a major push on the western side of the city, where an estimated 2,000 holdout jihadists and 750,000 civilians are trapped, government forces made steady progress.

But after relatively easy gains on the city’s outskirts, they encountered increasingly stiff resistance from the Islamic State group (IS) defending its emblematic stronghold.


“We had an important operation this morning to move towards the bridge,” Colonel Falah al-Wabdan, from the interior ministry’s Rapid Response units that have spearheaded the breach into west Mosul, told AFP in the Jawsaq neighbourhood.

“We have moved past a large berm constructed by Daesh (IS) with tunnels underneath,” he said, adding that the area was heavily mined and that his forces had killed 44 jihadists on Sunday alone.

Wabdan was referring to what is known as “the fourth bridge”, the southernmost of five bridges — all of which are damaged and unusable — across the Tigris River that divides the northern Iraqi city.

Government forces retook the east bank from IS a month ago, completing a key phase in an offensive on Mosul that began on October 17 and has involved tens of thousands of fighters.

Wabdan said that securing the bank area near the fourth bridge would allow engineering units to extend a ribbon bridge to the other side and further pile pressure on the jihadists.


– Key supply line –
“It is very important because if we take it, engineering units… will be able to throw a bridge across from the left bank so we can move supplies and ammunition from the battle field,” he said.

Bridging operations under fire are complex and perilous, but Iraqi forces have been trained by the US military and successfully used that strategy before in the fight against IS.

A ribbon bridge assembled with US assistance over the Euphrates River was considered a turning point in the battle that eventually saw Iraqi forces retake the western stronghold of Ramadi from the jihadists a year ago.

Rapid Response was confident it could reach the bridge on Sunday but IS was fighting back, killing at least three government fighters, according to Phil Suarez, who heads operations for NYC Medics, an NGO providing trauma care south of Mosul.

The elite Counter-Terrorism Service that has done most of the fighting against IS in Mosul so far entered the western neighbourhood of Al-Maamun on Friday.

Troops from the US-led coalition assisting Iraq in its efforts to claw back the swathes of territory it lost to IS in 2014 have stepped up their involvement on the ground in recent weeks.


They are officially deployed in Iraq as trainers and advisers, but have increasingly been drawn into combat and been more visible than ever on the front lines since the push on west Mosul was launched on February 19.


– ‘Eating bird feed’ –
The western side of the city is a little smaller than the east but more densely populated and home to some areas considered traditional jihadist strongholds.

It includes the Old City, where Abu Bakr al-Baghdadi made his only public appearance and proclaimed a “caliphate” in July 2014, and several of Mosul’s key landmarks.

Around three quarters of a million people are virtually besieged there, in some cases used as human shields by the IS fighters preparing to defend their last major bastion in the country.

“With the battle to retake western Mosul now in its second week, we are extremely concerned about the 800,000 or so still trapped in some of the most dire conditions,” Karl Schembri, spokesman for the Norwegian Refugee Council, told AFP.

Food supplies have dwindled as fast as costs have soared, leaving many on barely a meal a day.
“We’re hearing reports of people eating bird feed inside western Mosul as they cannot afford the skyrocketing prices,” Schembri said.

Residents and medical workers say that the combined effect of malnutrition and the shortage of drugs is starting to kill the weakest.

The United Nations has planned for an exodus of at least 250,000 people from west Mosul, but in the absence of humanitarian corridors only a few hundred have been able to flee so far.
at February 26, 2017