This week, Whiteboard Friday is hosted by the amazing Tara Reed who'll walk us through how to use social media broadly and Twitter in particular not only to earn engagement and a following, but to drive visitors directly to our websites and to the content that converts. Let's dive in! 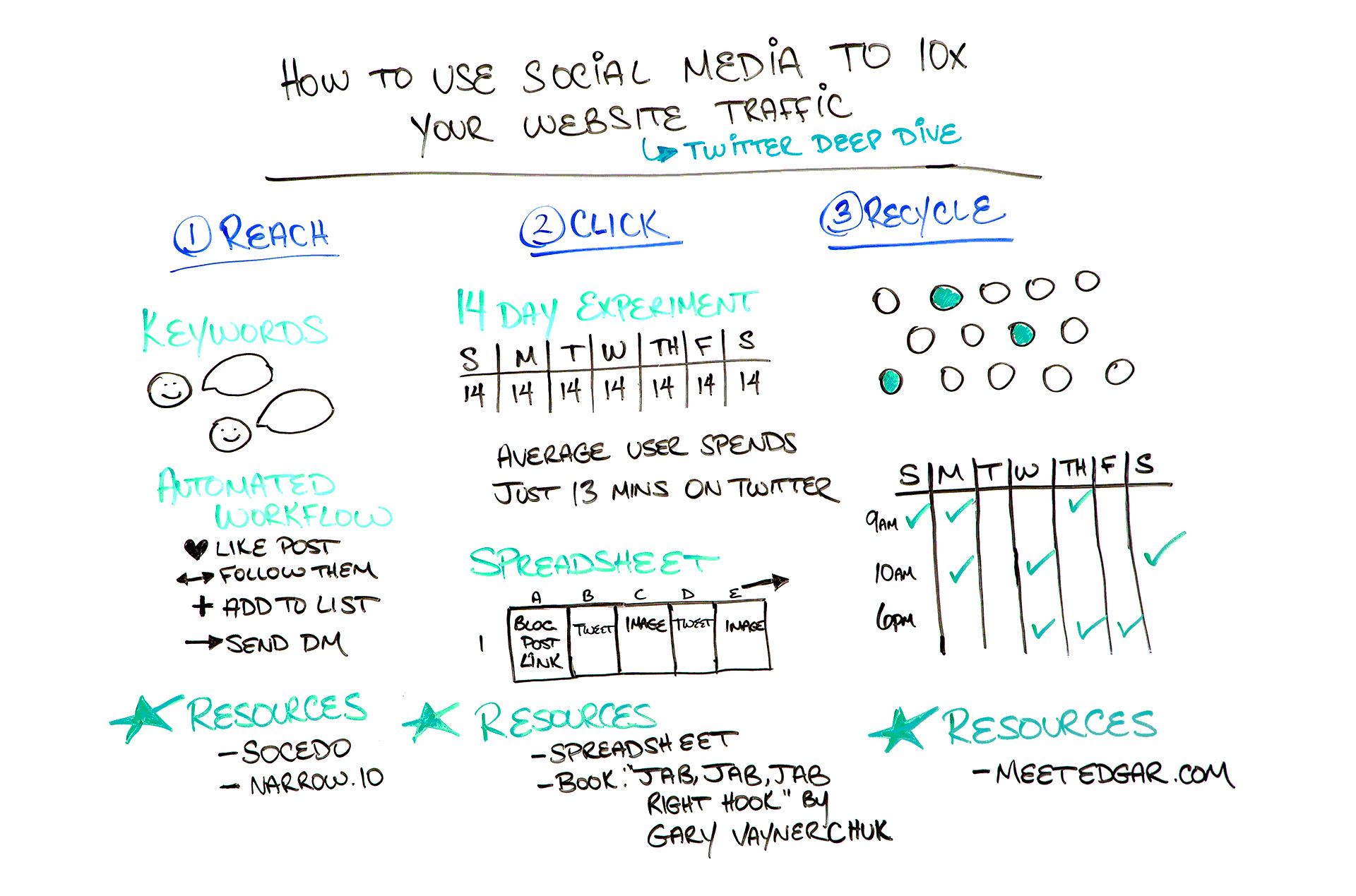 Click on the whiteboard image above to open a high resolution version in a new tab!


We're talking about how to use social media to 10x your website traffic. Specifically, we're talking about how to use Twitter. We're doing a deep dive of Twitter and how to use Twitter to do that 10x-ing of your website traffic. How do you take people from your social media content to your actual website and flow them through that funnel? I'm going to be giving you a process today to automate a lot of that work that sometimes we do manually.
Before we jump into that, I just want to ask you a quick question. How many of you feel like you have a well-oiled machine that is taking people from your social media content through and all the way to your site? If you don't feel like you have a really strong, well-oiled machine, I've got one here for you, and you can implement all three parts of this three-step process I'm going to show you in order to really, really drive a lot more traffic, squeeze a lot more traffic out of your social media following and your social media presence.

So this process has three steps. The first step is reach. This is something that most people skip over entirely. They sit back passively, and they wait for people to find their social media site. So I want to offer an alternative for you that's going to be a lot more proactive, and here's how it works.

There are thousands, if not millions of people out there who are actively posting, tweeting, and saying that they want your product, your service, whatever it is that you have. So for example, if you have a company that helps people find apartments, there are thousands of people every day who are posting, "I'm thinking about moving to Seattle next month," "thinking about going here." They're actually saying these things in their social media posts, and you're just letting them say these things and you're not actually engaging with them. But there's a really awesome way that you can do that, and I want to walk you through how. 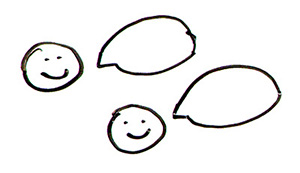 So what you're going to want to do first, in order to find these people, is write down a couple really clear keywords around the types of things that people are saying in social media to indicate high interest.

These keywords are going to be slightly different than the keywords that someone might type into Google or into a search bar, because the types of things you say on social media are just slightly different. So for example, you might say "looking for an apartment" on social media, but on Google search you might type in "apartments in Seattle," and that's a slight difference there. So you want to be conscious of the social media platform that you're on when you're writing out your keywords. 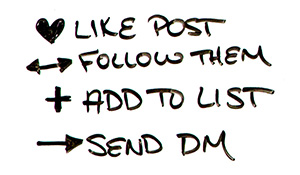 Once you have your keywords, the next thing you want to do is build an automated workflow to engage with these people. There are a couple different things that you can do to create an automated workflow. You get to decide which of these four elements you want to use to create the most organic experience for you and for your brand. But there are four different types of ways you can engage with these people who are actively saying that they want whatever it is that you have. So you can:
But what you're going to want to do is use some of these, maybe not all four of them. But come up with a strategy that feels really organic and an outreach, because you don't want to just leave these people hanging out there. You want to make sure that you're engaging with them in some way. It's low-hanging fruit, and it's really going to help you squeeze a lot of value out of your social media content.

So I've outlined some resources for you to use in order to do that. These are two of my favorite tools.
Socedo does a really good job automating this workflow of reaching out to people who are prospective customers, prospective users, prospective visitors of your website. There's also a tool called Narrow.io that you can use.

So once you're doing this outreach, you're not passively sitting back, you're actually engaging with the people who really want whatever it is that you have, we're going to move over to the second strategy -- to click. Now, what you want to do here is have something really valuable for these people to actually click on, because what they're going to do is they're going to click on your profile link and they're going to arrive here. That is why I recommend people implement something I call a 14-day experiment.

A 14-day experiment is when you take your top blog posts and for 14 days, every single day you post 14 posts, different blog posts. You can mix them up. But every day you are posting 14 links to a blog post with some interesting, unique content. The reason you want to do this is that the average user spends just 13 minutes on Twitter at a time. So the chances of them seeing more than one of those posts in your day is really slim. So you want to do 14. It may feel like a lot for your company and for your brand, but really that's where you want to be in order to really squeeze out all that value on your social media site.

Some resources to help you do this, obviously a spreadsheet. Really easy, that is all you need. But I also have a book recommendation for you. It's called "Jab, Jab, Jab, Right Hook" by Gary Vaynerchuk. I've had my team and other teams read this book as a group. As they go through putting together their 14-day experiment, it's a really great way to rally your team around the ideas and get everyone involved. So if they want to contribute some content into this spreadsheet, they're already on board and excited to do it.

You're not just going to want to post your blog post one or two times. You're going to want to take everything you put in the spreadsheet and put it into a tool like Edgar. Edgar is a tool that allows you to recycle content. So after the blog post has gone up one day, 14 days later, a month later, it'll show up again, that same exact post. People probably haven't seen it yet, and so it's going to allow you to recycle your content on auto-pilot.

These two elements on the side of me -- the outreach part and the recycling part -- those are things that you can get going on auto-pilot. They're running on their own. This middle piece, you're going to have to do some upkeep. You're going to have to maintain content, add new content to your funnels. But for the most part, this is going to allow you to cohesively build a really cohesive strategy that's going to automate the experience. It's going to really squeeze a lot of the content, a lot of the engagement that you can get to get people from just looking at your social media profile, bring them to your social media profile, and then funnel them through to actually be on your website.
at December 16, 2016