Range-topping estate gets 228bhp and goes from 0-62mph in 6.3secs - but what do the critics think? 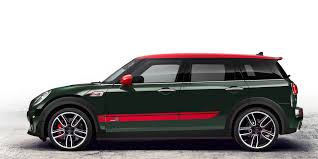 First reviews are in for next year's range-topping Mini Clubman John Cooper Works (JCW), which is set to rival the Volkswagen Golf R and Ford Focus ST.


The Clubman JCW comes with a host of improvements over the standard model, including upgraded sports suspension, a new brake package with refined cooling ducts and Mini's ALL4 all-wheel drive system.


It's the most powerful Clubman yet, but can it compete with its hot hatch competitors?
Here's what the critics think.

Unlike the "agile" three-door Mini Cooper S, the Clubman's hefty 3,417lbs makes it feel sluggish as you "watch the revs rise without any real haste", says Auto Express. It's a "problem" found on the standard Cooper S ALL4 and could be rectified with the six-speed manual gearbox option.


However, its engine remains one of the more characterful four-cylinder units on the market, the mag adds, "popping and crackling" on the overrun thanks to the new exhaust system. This makes the Clubman feel "boisterous" and different to a direct rival of the Volkswagen Golf.

Evo says the Clubman JCW "doesn't feel as fast as its figures suggest", which may be partly "due to the car's weight". Its lacklustre engine and transmission combination would be somewhat "tolerable" if it weren't for the "artificially compromised" steering, it continues.

The cabin is packed with flashes of "plasti-chrome embellishment" and can feel busy with the switchgear design, the mag adds. However, it has a "decent" seating position which is helped by the adjust steering wheel.

Top Gear agrees, saying the interior feels like a "real quality item" with plush materials and impressive tech gadgets bundled in. There's enough room in the back for adults "under six-feet", although boot space isn't much bigger than "a regular five-door Focus".

The Clubman JCW breaks the convention of "daft" fast Minis, the site continues, as it rides "pretty comfortably" and has a calm handling balance. While the ALL4 all-wheel drive system is "undoubtedly clever", a front-wheel drive version would be lighter and potentially more "exciting".

Orders for the Clubman JCW are already open, with the six-speed manual version starting from £29,345 on the road and £30,945 for the eight-speed automatic model.